As far as the Crusaders' goal of pilgriming to Jerusalem, taking back the Holy Land from the ruling Muslims, and annoying the crap out of everyone with their backstabbing ways, the First Crusade was a total success. As for the rest of the Crusades, don't get used to it. The Second Crusade, called nearly fifty years after the First, began the pattern of the European invaders having a goal in their heads, and then getting completely distracted on the way there. This strategy might work on a Saturday night-out with your friends, but had devastating consequences for all the money, manpower, and Mapquesting needed for your typical crusade. Add in the shifting alliances, political intrigue, and huffy overreactions typical of European relations at this time (or really anytime), and the Second Crusade was basically a drama-ridden train-wreck of a Spanish soap opera, without those spicy senoritas. I know, I wouldn't blame you if you stopped reading either.

The tone of non-cooperation exhibited by the Second Crusaders was established by the descendants of the First. The original Crusader States (fig.1) kept themselves busy from 1098 to the 1140s, mostly by arguing with each other over territories and suffering from constant succession crises whenever their leaders died (as what happened in Jerusalem with King [Daniel] Baldwin II died and his wife sold herself, and the crown, to the highest bidder). Adding to the frustration, the Byzantine Empire shifted alliances with the various states against the others whenever the spirit moved them, and many even made friends with their Muslim neighbors against fellow Christians (which might be considered traitorous, but given how trustworthy the Crusaders have been in the past, I really don't blame them). The least popular state was the County of Edessa in the northeast, ruled by Count Joscelin II. Joscelin made plenty of enemies by being buddy-buddy with those Orthodox Byzantines and always making fun of King Fulk of Jerusalem ("Look out, it's the Incredible Fulk! You wouldn't like him when he's angry!"). Nonetheless, alarms went off when Edessa fell to a Seljuq Turk named Zengi in 1144; now Muslim forces were camped just two hops, three skips, and not even a half of a jump away from the rest of the Crusader States!

When this news reached Europe, you would have thought an asteroid was approaching Earth with no Bruce Willis to save them. Pope Eugene III quickly issued the Quantum Praedecessores, a papal bull authorizing a Second Crusade to save Edessa and the rest of the Crusader States (as well as a scathing review of Quantum of Solace, the worst Bond film of all time). This crusade was made to be more organized and efficient than the First: instead of arrogant noblemen, who constantly argued with each other and seemed more concerned with increasing their ownership of land and wealth, being designated as the leaders, this one would be commanded by kings who totally did none of those things. *cough* Let's introduce the major players: 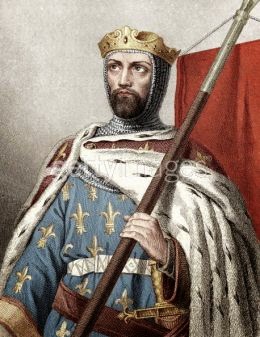 King Louis VII of France, ruler of the most powerful realm in Europe. Can you believe there was a time when that happened? 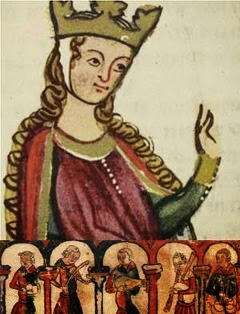 Eleanor of Aquitaine, wife of Louis VII, became one of the first influential women to join a crusade. Ambitious, powerful, and easy on the eyes, she has also recently developed a reputation for being quite grumpy. 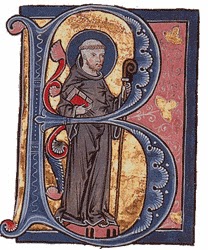 B is for Bernard of Clairvaux, a popular abbot who preached to the masses and convinced thousands of noblemen and peasants alike to take the cross. Much more personable and less cranky than Peter the Hermit of the First Crusade, he also discouraged Christians as best as he could to not attack the Jews during this call to arms. Pogroms still occurred, resulting in his grade of a B. 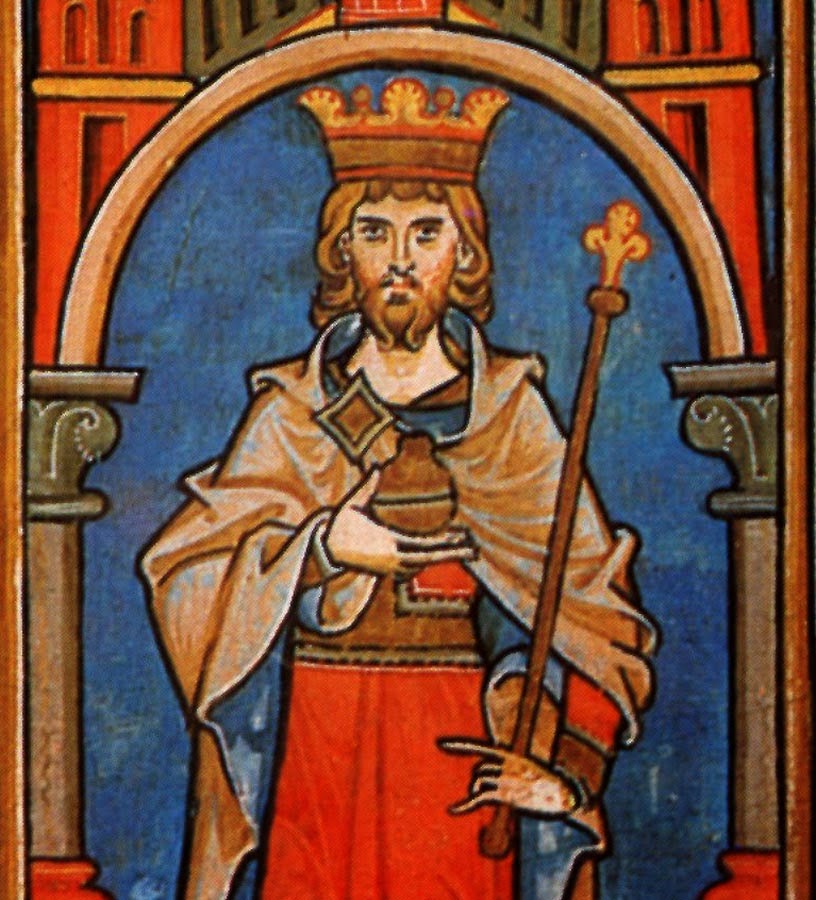 King Conrad III of Germany did not initially want to go on a crusade, but then Bernard guilt-tripped him by saying that Christ gave him power, strength wealth, a kingdom, and how does he repay him? Bernard then used the same tactics to convince Conrad to help him move the following weekend. 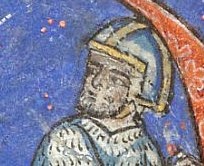 Nūr ad-Dīn Abū al-Qāsim Maḥmūd ibn ʿImād ad-Dīn Zangī (or thankfully just Nur ad-Din) took over as the Muslim ruler of Edessa, as well as much of present-day Syria and Iraq, following his father's assassination. He was ready and dressed to fight the Crusaders on the battlefield, or at least the football field.

Finally, there's Byzantine Emperor Manuel I Komnenos, grandson of the Alexios I guy whose call for help resulted in the First Crusade. If you can't tell by his face, he was not happy about this Second Crusade, and wanted nothing to do with it. Who could blame him?

The armies headed out for the Holy Land in 1147, making their way through Europe and into Byzantine territory. Emperor Manuel, knowing all the headaches and hernias the Crusades have caused his Empire in the past, had troops at the border to ensure their cooperation and, in the spirit of irony, even made peace with the Seljuq Turks so he could focus on the more mistrustful French and Germans. The Crusaders were sent along quickly with a granola bar or two as provisions; Louis wanted Manuel to contribute troops towards the effort, but Manuel said he had a thing, shifted his eyes back and forth, and slowly backed out of sight behind a curtain.

Conrad continued on through Turkish territory without waiting for the French, who were notorious for taking forever to get ready in the morning. This turned out to be a bad time, as his German army was practically destroyed by the Turks at the Battle of Dorylaeum; Conrad then headed back to Constantinople with "the flu" (lamest excuse I've ever heard). Louis was having a bad time as well: running low on food, suffering constant harassment by the Turks, getting a papercut in the webbing of his fingers (ooooh, that's the worst). After a while, Louis decided to forgo the march and call for ships to take him the rest of the way there. Of course, there weren't enough ships for everyone; just him, a select few of his buddies, Queen Eleanor, and her massive wardrobe (hey, a lady has to look good on a crusade!). The rest of the army was told to march on to Antioch, which, not surprisingly, many died of disease, starvation, and those pesky Turkish stab wounds that just don't go away.

Louis and company safely landed in Antioch in March 1148. The Principality was headed by Raymond, who just so happened to be Eleanor's uncle (it's such a small world... especially when power was concentrated in the hands of specific wealthy families). This would actually cause some trouble: Raymond wanted Louis to team up with him and march straight to Edessa to take on Nur ad-Din. Louis insisted on completing his pilgrimage to Jerusalem and partying with his friends there before actually doing anything productive. When Eleanor tried convincing Louis that Raymond had a point, the French king accused his wife of having an affair with her uncle (just...ew) and had her put under arrest, creating little bit more of a strain in their marriage than that of the Clintons. Louis then gathered what was left of his army and marched down to Jerusalem, meeting up with what was left of Conrad on the way.

Once the Crusaders reached the Kingdom of Jerusalem, then ruled by [William] Baldwin III (unfortunately), a Council of Acre was called to decide where to proceed. All the bigwigs were there: kings, princes, counts, barons, dukes, lords, ladies, even a young George Clooney (he really has aged well). William of Tyre, a chronicler and one of the main sources for the Second Crusade, even says of the guest list: "To name each one individually would take far too long," which is something I say when I'm too lazy to write stuff as well (I feel ya, Willie). At the meeting, the group decided that, even though its fall to Zengi was the whole point of the Crusade, going to Edessa was out of the question. Instead, the city of Damascus as a better option to commit all of their resources and manpower. This was in spite of the fact that a different group of Muslims, the Burid Dynasty led by the all-around nice guy, Mu'in ad-Din, controlled Damascus, and was even considered an ally of Jerusalem (but hey, alliances were made to be broken, right?). If taken, the city could act as a springboard to other Muslim strongholds, and maybe Edessa if they cared to get around to it (that Count Joscelin really hurt those guys' feelings). Nonetheless, most historians see this decision as (spoiler alert) one of the biggest blunders in all of the Crusades, which is really saying something (just wait until the Fourth Crusade)!

But without that 20/20 foresight, over 50,000 Christian soldiers (from both Europe and the Crusader States) marched east to the ancient city of Damascus in July 1148. They took the scenic route through the orchard on the west side of town (fig.3), which provided them plenty of much needed food and shade, but also plenty of hiding spaces for archers who were notorious for ruining otherwise-memorable apple-picking excursions. In order to defend his city, Mu'in ad-Din called on Nur ad-Din for help, even though they were normally rivals; Nur ad-Din did show up, but mostly to watch from sidelines and say, "I call winner!" so he could take Damascus in the end. Despite heavy Muslim losses and a courageous assault from Conrad and his army (glad to see he did something other than complain and fake cough on people), the city held firm after four days, and the Crusaders were beginning to argue amongst themselves. Sick of the fighting, Conrad and the Germans left and returned to Jerusalem, followed by the other contingents. The attack on Damascus, and thus the entire Second Crusade, was a complete bust.

Soon thereafter, all the Christians became grumpy with one another. The Crusader States blamed the French and Germans for not willing to give it their all in their defense. Louis of France blamed the Byzantines, claiming they were out to sabotage the Crusade to begin with. Conrad of Germany disagreed, and made an alliance with Emperor Manuel against the French. Eleanor of Aquitaine, ever-so grumpy of Louis's actions in Antioch, was granted a divorce and promptly married the future King Henry II of England, starting the never-ending rivalry between those two countries. Bernard of Clairvaux, confused that God sent Europe's finest soldiers to the Holy Land only to fail, believed that the Crusaders were too sinful to succeed and needed to repent forthwith! All of this grumpiness clustered underground into a sullen aura of irritability, eventually conceiving the lord of cantankerousness that is the Grumpy Cat! All hail Grumpy Cat!

On the other hand, the Muslim rulers of the Middle East sure weren't grumpy. Nur ad-Din did eventually take advantage of a weakened Damascus in 1154, establishing yet another enemy in the Crusaders' backyard. (This confirmed that the Christians would have been better off if the Second Crusade never happened to begin with, which is honestly the case for most sequels.) The Crusader States tried to take advantage of Muslim in-fighting, but this actually made the Muslims stronger: a son of a Zengid general named Salah ad-Din (nicknamed Saladin) became so popular and won enough battles that he united the various groups in Egypt and Syria in 1171, effectively surrounding the Crusader States. In 1187, Europe's nightmare came true with the fall of Jerusalem back into Muslim hands. You know what that means? Join us next time for yet another crusade! (They're not getting old yet, right?)
Composed by Sima Dave circa Sunday, June 15, 2014