The Romans were a very successful civilization back in the day, and part of their success can be attributed to all the battles they won. However, one of the biggest battles that directly led to the development of their expansive empire that blanketed three continents and turned the Mediterranean into a Roman nude beach was one in which they absolutely got their butts kicked. That's what happened in 53 BC near the ancient town of Carrhae in present-day Turkey. Rome had been squabbling for control of the region with the Parthian Empire, who already ruled Persia and Mesopotamia and was looking to expand their influence and carpeting business into Anatolia. Though the Romans lost the battle, as well as their richest man during the fighting, it set into motion a sequence of events that allowed Julius Caesar to take over the city and the eventual creation of the Empire that grabbed everything they saw. Yeah, maybe the Parthians should have just thrown that battle.

While Rome was technically a republic in the 1st century BC with its elections and term limits and abhorrence for all thing kingly (they would have definitely rooted against the Kansas City Royals in the last World Series), it was quickly losing its republican-ness over the decades. Events like coup d'etats, the elimination of political enemies, and the violent quelling of protests were really messing up the republican vibe in the city. Plus, the constant domination of their neighbors such as Carthage, Macedon, and Iberia were making many Roman generals cocky, and a few decided to bring their work home with them. Three such men practically hijacked the Roman Republic starting in 60 BC, in a political alliance that came to be known as the First Triumvirate:

Marcus Licinius Crassus was pretty much the Donald Trump of the Roman Republic. He was the richest man in the city at this time, was active in his political and business ventures going into his 60s, and most people questioned the authenticity of his hair. 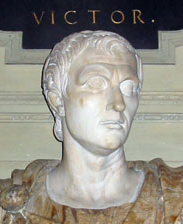 Gaius Julius Caesar (who wasn't a fan of his first name) was pretty much the new guy in town. A minor official from a less-than-noble family, Caesar brought Crassus and Pompey into his fold in order to advance his career. Both men thought they could use Caesar for their own purposes; at the time, he definitely seemed like the last guy in the Triumvirate that was going to get a salad named after him.


These three men used their strengths to ensure they got the political positions they wanted, and that other political positions went to people who would do what they wanted at the drop of an olive wreath. Caesar was made the proconsul (pretty much a military governor) in Gaul (present-day France), which allowed him to march his armies up and down on the Gallic inhabitants and then brag about it in third-person in his best-selling book. Crassus and Pompey kept everything under their thumbs in Rome, having favorable laws passed, hiring ex-soldiers to control the streets, and rigged the voting on Roman Idol. But Crassus seems to have been a little jealous that he was the only Triumvir that wasn't celebrated for his battle prowess; while he was the one who took care of Spartacus' slave revolt in 71 BC, that was promptly forgotten about once Pompey cleared the Mediterranean of pirates and Caesar sailed his troops into Britannia to meet the queen (who was a little younger-looking than she is now).

So Crassus demanded that he be given a proconsulship out east in Syria, which was right on the border with the Parthian Empire. Though the Romans and Parthians had a peace treaty on the books, Crassus decided that he would misread the part about the two powers being "no longer at war" to mean that they would have a "longer war." Many in Rome were against the appointment, and a leading official even placed a curse on Crassus as he was about to depart; despite Crassus' counter that "I am rubber and you are glue," many would see the curse as foreshadowing for what would transpire. Crassus arrived in Syria in 54 BC, and would be joined by his son, Publius Licinius Crassus, who had his own success in Gaul for his father to be jealous about. The Romans quickly established alliances with local tribes and the king of neighboring Armenia, raised an army about 40,000 strong, and prepared for war.

The Parthians were ready for war themselves, long looking for an excuse to venture westward (and conquer westward while they were at it). King Orodes II went through the trouble to overthrow his brother for the throne twice in three years, and was looking for military glory in order to prove he was the superior sibling. While he waited for Crassus further into Mesopotamia with the majority of his army, he sent his loyal general Surena, who helped him overthrow his brother twice (and twice got a nice bonus for it), to ride ahead with 10,000 mounted archers merely to slow Crassus and his superior force down. Crassus was already taking it easy anyway, armed with faulty information from a Parthian spy that his enemy was disorganized and couldn't even afford their mocha lattes to keep them going in the morning. Thus on May 6, 53 BC, he was rather surprised to find Surena's cavalry force charging at him outside the town of Carrhae.

Despite the fact that he outnumbered the Parthian force 4-to-1, Crassus hesitated when pressed for action. Archers on horseback was something the Romans had not really encountered before, especially those as good as the Parthians who were famed for their ability to shoot forward, backwards (fig.3), and upside-down. It was even more intimidating that Surena ordered for the beating of loud drums as they moved ahead, the presence of which scared the Romans since everyone knows that drummers are the craziest members of bands. Crassus ordered for his troops to pack together and raise their shields, hoping to wait it out and that the Parthians would just run out of arrows eventually. But the mounted archers kept coming and going, knocking out any idiot who dared peek his head out to see if it was safe yet. Sick of waiting, Crassus ordered his cavalry, led by his glory-hogging son, to take care of their counterparts. Unfortunately for the Romans, the Parthians took care of them easily, and the next time Crassus envied his son would be when he saw how good his head looked stuck on a pike.

At the end of the day, 20,000 Romans were killed, 10,000 were captured, and the other 10,000 were in a bad mood for quite a while. Historians have disagreed as to what happened next. 1st-2nd century Greek historian Plutarch said Crassus met with the Parthians in order to sue for peace, but a misunderstanding about where to leave his horse caused a scuffle in which he was beheaded (and you thought parking in New York was bad). 2nd-3rd century Roman historian Cassius Dio claimed it was the Parthians' intention to kill Crassus from the start, and then poured molten gold down his lifeless throat to punish him for his greed in one of the most expensive examples of symbolism in history. Modern historians tend to discard these stories and boringly contest Crassus met his end in the confusion of battle. In order to liven things up, the Canned Historian will claim that the Mongols swooped in and knocked Crassus out with a well-timed ninja star throw to the throat. No matter what actually happened to Crassus, the Roman army in the east was in shambles. Survivors quickly retreated, allowing several Legionary Eagles to get into the hands of the enemy. The Parthians might have taken more territory as well, but King Orodes was more jealous than grateful of Surena's success, and promptly had him executed for his victory. This is why you should always give less than your best at the workplace.

But things certainly changed in Rome with the outcome of the battle. Now that Crassus and, more importantly, his money was gone, the relationship between the surviving Triumvirs began to collapse. Pompey allied with the Roman Senate to prevent Caesar from gaining any more power; Caesar responded in 49 BC by "crossing the Rubicon" (the phrase) with his choice to cross the Rubicon (actually doing it, fig.4), bringing along his loyal troops to help take Rome for himself. Eventually Caesar and Pompey met in 48 BC at the Battle of Pharsalus in Greece, where Caesar tossed Pompey's troops and dressed them with their own blood; Pompey would escape only to be killed in Egypt. Caesar was soon named dictator-for-life and all that good republican stuff, but in 45 BC he forgot to mark on his calendar to beware the Ides of March, and was stabbed by several senators (including Gaius Cassius Longinus, who was one of the few survivors of the Battle of Carrhae). This led to more civil wars and even a Second Triumvirate (since it worked out well the first time), with Caesar's great-nephew emerging victorious and being proclaimed the first Emperor. Rome would thereafter continue to grow, and even take Mesopotamia away from the Parthians for a time. When Rome loses, they lose big!

Who knows if Rome would have achieved as much as it did if Crassus did not lose, or even die, at the Battle of Carrhae. Had things turned out differently, would the First Triumvirate have collapsed? Would Caesar have taken over Rome and ate away at the fabric of the Republic? Would there have been a Roman Empire at all? What about the spread of Christianity, or the Renaissance, or a way to number the Super Bowls? Such questions may never be answered (where's Miss Cleo when you need her?), but as it stands, the Battle of Carrhae remains one of the best losses in Roman, and even world, history. So the next time you don't get that job you really wanted, or get rejected by your crush, or get kicked out of your animal rights club for wearing a sweater made of 100% baby otter scalps, just think how much brighter your future will be because of your present failings!
Composed by Sima Dave circa Thursday, February 05, 2015