Oh yeah, Crusades Month is back, and better than ever! Well the scope and overall effectiveness of the Crusades covered this month aren't better than ever (believe it or not, they're even worse), but that doesn't mean we still can't have fun at the expense of trivial religious warfare! This month I will be covering Crusades 5-7, which, if they were movie sequels, would be well past the tipping point of enthusiasm for even the most beloved film franchises (unless you're The Fast and the Furious, for reasons I dare not comprehend).

By the year 1213, the Crusades have had over a century to build up their reputation of suckiness. The First Crusade (1096-1099) allowed the Christians from Europe to conquer the holy city of Jerusalem from the various Muslim groups that previously controlled it, only to undermine their victory by bringing their typical European pettiness along with them. The fall of one of their possessions led to the Second Crusade (1145-1149), which not only attacked the wrong Muslims, but also lost against them! The fall of Jerusalem to Saladin led to the Third Crusade (1189-1192), which started out pretty promising for the Christians under the leadership of Richard the Lionheart, only to have it all end with a dud in the name of peace (yawn). And then there was the Fourth Crusade (1202-1204), which didn't even make it to the Holy Land and only led to the destruction of the Christian city of Constantinople (granted, they totally deserved it for leavening their communion bread). Instead of just cutting their losses and focusing on other things, like, I don't know, feeding their starving peasants or something, Europeans decided to call for yet another crusade. And so the franchise regretfully continued (a quote that would be repeated ever since Transformers got a sequel).

As always, let's check out the major players of Crusade #5: 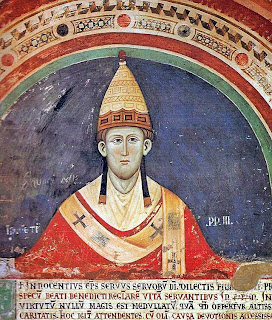 Pope Innocent III was embarrassed by the overall lack of direction of his Fourth Crusade. He decided that the papacy would take more control over this next crusade, which should mean that the Pope's supposed infallibility would wane if it ended up failing. I guess that's not how Catholicism works... 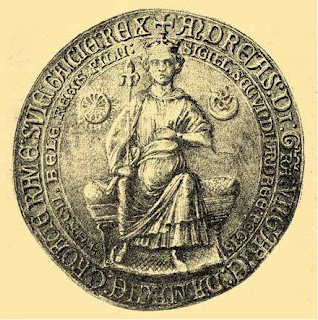 King Andrew II of Hungary decided that his country needed a little more publicity, and led the largest single army in the history of the Crusades (over 30,000 men). Looks like someone wasn't praised enough as a child... 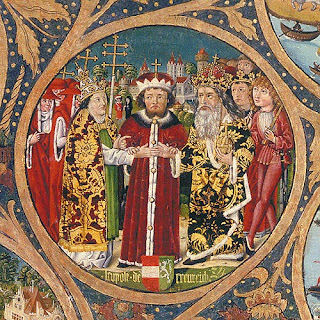 Duke Leopold VI of Austria also took time out of posing for awkward family pictures to lead an army into the Holy Land.

John of Brienne was King of Jerusalem, which, in 1213, did not actually include the city of Jerusalem. Just go along with it. 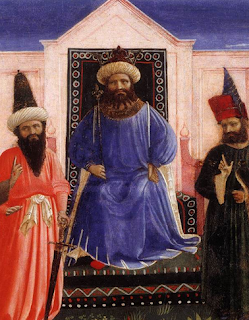 Al-Kamil was the nephew of Saladin, and divided rule of Muslim Ayyubid Dynasty in Egypt, Syria, Mesopotamia, and Palestine (where Jerusalem was actually ruled) with his brothers, al-Mu'azzam and al-Ashraf. The look on his face demonstrates the excitement he felt that another crusade was on its way. 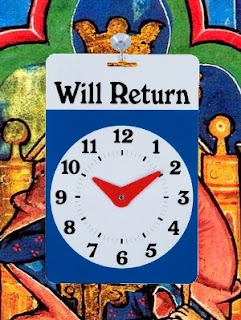 Finally, there's the Holy Roman Emperor, Frederick II. He made the vow that he would commit himself to a crusade, but wait, I guess he's not available right now. I suppose we'll check in on him later.

Pope Innocent worked day and night for three years organizing the Fifth Crusade, making sure every little detail was meticulously planned out so that there weren't any nasty surprises. His idea for garnering support for the crusade was to award indulgences (free tickets to heaven) not only to those who signed up to march to the Holy Land, but also to those who helped feed, clothe, or arm the soldiers. While extremely successful at the time, this practice would spiral out of control to the point where some guy named Martin Luther would say a few things about it (95 things, to be exact), and eventually led to a war that started with a couple of dudes getting thrown out of a window, but let's not get too ahead of ourselves. Of course, as soon as Innocent had everything figured out in 1216, he died, presumably of workalcholism. Thankfully, his successor, Honorius III, was as honorable as Innocent was innocent, and the crusade continued as planned.

In August 1217, King Andrew and Duke Leopold sailed across the Adriatic Sea and landed in Acre, one of the few cities in the Holy Land still under the control of the Jerusalem-less Kingdom of Jerusalem. Once their forces were combined with that of King John, they definitely had the manpower to attempt a siege on the city; however, they decided to wait for Emperor Frederick to get off his lunch break and arrive with his army before they did anything too major. So they killed time by attacking minor forts held by the Ayyubids, reinforcing the walls of their own cities, and taking Buzzfeed quizzes such as, "Which disciple are you?" After just three months of as little fighting as possible, King Andrew of Hungry decided that he fulfilled his crusading vow, and for left home along with his 30,000 troops. Not even threats of excommunication from Honorius could keep him away from his goulash (fig.2) for much longer. Luckily, reinforcements of Italian and German troops arrived early in 1218, but Frederick was still too busy getting his nails done to join them.

The crusaders were now at another crossroads. King John knew if they attacked Jerusalem and were successful, the troops would consider the job done and hightail it back to Europe; this would leave the city undefended and allow the Muslims to literally waltz right back in (they've been taking dance lessons). If they wanted to be successful in the long-term, they had to attack the center of Ayyubid power in Egypt. So in July 1218, the Crusaders marched into the Nile Delta and besieged the coastal city of Damietta, with the intention of using it as a stepping stone to the capital of Cairo. When al-Kamil found out about this, he delivered his patented eye roll. He was already dealing with rebellions within his own realm because many subjects found him too edgelordy to be a good ruler, and had no desire to brood over the Crusaders as well. Al-Kamil decided to propose a deal: if the Crusaders left Egypt, he would return Jerusalem into Christian hands and promise not to attack for eight years. To sweeten the deal, he even promised to throw in a fragment of the cross upon which Jesus was crucified if they agreed in the next ten minutes (a value of $19.99, absolutely free)! King John was ready to accept the deal, until...

During the constant merry-go-round of soldiers coming and going, a Spanish cardinal by the name of Pelagio Galvani was sent to the Crusaders' camp by Pope Honorius, just to make sure everything was going honorably. Pelagio was against the deal, arguing that truces had been broken between Christians and Muslims before, and the Ayyubids could easily take the city back once the crusading armies were back in Europe. So King John and Pelagio succeeded in splitting the army in two as they bickered more than teenage siblings in the back of a car during a road trip, which allowed al-Kamil to crack a smile for once. Little progress was made throughout 1219: Duke Leopold had enough sand for one lifetime and led his Austrian army back home; more Germans arrived, promising that Frederick would join them as soon as his laundry was dry; and a monk named Francis of Assisi visited al-Kamil and, while he did not get the Ayyubid sultan to accept Christianity, he did arouse other emotions that he had never felt before (fig.3) The Crusaders finally took Damietta in November, but the troops were too worn out from the siege to continue onto Cairo, and preferred to hang out in such Christian places like brothels and gambling houses instead (sign me up for the next crusade!).

Pelagio proposed a march south to attack al-Kamil's camp outside of Mansurah, just to give the troops something to do. King John disagreed, thinking it was a waste of time and energy, but the relationship between the two was strained to the point where Pelagio threatened excommunication the next time John even breathed funny. So in July 1221, a Crusader force of at least 15,000 left Damietta set up camp along the Nile River. Unbeknownst to them, this was just before the river's annual flooding season, and it might have actually been safer to snuggle up with the Ayyubid soldiers for the night than to park right on the beach. Doubly unbeknownst to them, al-Kamil was joined by his brothers, and the Ayyubid force heavily outnumbered and surrounded the Crusaders. Not that the Muslim troops really needed to do much: on the morning of August 26, 1221, al-Kamil ordered the destruction of the dams that held the rising waters of the Nile in check, and the Crusaders woke up to quite a soggy breakfast (thus the mnemonic device to help remember the cardinal directions was born). Pelagio, who was trained to save souls and not drowning bodies, begged King John to take back command, and apologized for crossing his eyes and making a face every time he talked. John saw no alternative other than to surrender to the Ayyubids after hardly a battle.

Obviously, the deal offered by al-Kamil following the Crusaders' defeat was not as sweet as the one he proposed beforehand (that's the first thing they teach you in Negotiation 101). In the terms of surrender, the Crusaders had to leave Egypt, promise not to attack any Ayyubid-held city for eight years, and pay an exorbitant entrance fee per person for the Nile River Water Ride they experienced. In return, al-Kamil promised to return that True Cross fragment, just so the Crusaders wouldn't walk away empty-handed. While the leadership agreed to the terms, the soldiers in Damietta rioted, especially the Germans who believed no deal should have been made without Emperor Frederick (who they swore was grabbing one last bite to eat before heading out the door). Frederick or not, the Crusaders were forced back to Europe by the end of 1221 without any lasting accomplishments to their name. To make matters worse, it turned out al-Kamil didn't even have the True Cross, mistaking it for a lousy piece of Noah's Ark (you can find those anywhere!).

And so the Fifth Crusade ended with nothing gained. As is typical with an unsuccessful crusade (or should I just say "crusade"?), the blame was flung around everywhere, from the initial leaders' premature departure, to the deep divisions within the armies, and to Pelagio's decision to let al-Kamil's deal go belly-up (along with many of the Crusader troops). But the one who received the brunt of the criticism was a guy who didn't even show his face in the Holy Land: Emperor Frederick, who woke up from his afternoon nap after the crusade was over saying, "Jerusa-who?" Of course, he would eventually feel the need to make up for his absence on...you guessed it...a brand new crusade. As al-Kamil said in his deadpan voice, "Oh, goody goody gumdrops."
Composed by Sima Dave circa Tuesday, June 09, 2015