What is the United Kingdom?


If you talk to someone from the United Kingdom, it really sounds like they have a identity crisis on their hands. Sometimes they'll call themselves British, sometimes English, others Scottish, Welsh, Irish, Cornish, or even Klingon (although those last people are just nerds). Sometimes people refer to England, Scotland, Wales, and Northern Ireland as "countries," even though they make up the country that is the United Kingdom, and sometimes they'll tack on a big word like "constituent country" to demonstrate the difference. There is a central Parliament in London, but Scotland and Wales have their own Parliaments too. They all use the pound sterling, but it's scorned upon to use a Bank of Scotland pound in England, even though it's the same country! Most importantly when it comes to power brokering and diplomacy, the constituent countries each have their own soccer team! So what is going on with this place? Why can't we call just get along? And what if God was one of us?

The divisions in Great Britain between England, Scotland, and Wales began during the Roman conquest of the island in the first century that doughnuts were invented (AD, anno doughnutty). They were able to take over modern England and Wales, but Scotland remained aloof to them, probably because the Romans just couldn't get into eating sheep entrails (fig.2). In the fifth century AD the Romans hightailed it out of there, and shortly thereafter some nice folks called the Anglo-Saxons from Germany moved right in, most likely after the necessary rape and pillage. They concentrated on the section closer to the continent (England), stayed away from the north (Scotland) and the west (Wales), and that island farther to the west (Ireland) pretty much played spectator in all of this hoopla. And thus the arbitrary divisions that create nationalities were born!

As expected, it were those snooty English who took it upon themselves to bring everybody together. In 1155, King Henry II of England received permission from the Pope, who was also English at the time (conspiracy, anyone?), to invade Ireland because their form of Christianity was slightly different (aka: it was quite the same except they weren't sending any money to the Pope). So Henry invaded (with the rape and pillage), took over a decent chunk of Ireland, and proclaimed his son, John, Lord of Ireland in 1171. John eventually became the King John of Robin Hood fame ("Save me, save me, hurt them, hurt them!"), and thus from now on the King of England was also the Lord of Ireland. This lasted until 1542 when I'm-Henry-the-VIII-I-Am promoted himself to King of Ireland, with a raise and benefits and everything. So while the Kingdom of England and the Kingdom of Ireland were two separate entities, with two separate Parliaments, they were ruled by the same monarch, which is pretty much like saying that Fox News and the Republican Party are two separate things.

Wales didn't get off so easy. In the late 1200s, King Edward I (whose nickname was Longshanks, which should make everyone giggle) invaded (rape and pillage) and overran the multiple principalities there. In the spirit of procrastination, there really wasn't any official administration of Wales by England until Good-Old-I'm-Henry-the-VIII-I-Am-I-Am in 1542. Unlike Ireland, which retained a fake-independence, Henry decided that Wales should be annexed into the Kingdom of England, causing Wales to disappear from the map and from the world's mind until...well...basically forever (fig.3).

Scotland fought it off as long as possible. That Longshanks guy fought a war with Scotland from 1296-1328, but William Wallace and Robert the Bruce and "They may take away our lives, but they'll never take our FREEDOM!" and blah blah blah, so England failed, which is something that isn't said often. However, things got complicated in 1603 when Queen Elizabeth I of England died without a husband or children or bridge partners. Her closest living relative was her first cousin twice removed named James Stuart, which normally wouldn't be that big a deal, except for the fact that James just so happened to be the King of Scotland. Whoops! So James became King of England, King of Ireland, as well as King of Scotland at the same time! And they say men can't multitask! Each Kingdom retained its own Parliament, so the charade went on about it not being a single country for another hundred years.

This changed with the Act of Union in 1707. Essentially, Scotland went broke wasting their money on failed colonization attempts and faulty haggis encasing contraptions designed by Ron Popeil, and needed England's economy to stay afloat. England agreed, partly to keep Scotland within their fold, and partly to satisfy England's innate desire to take over other places. And so the two Kingdoms and their Parliaments merged to become the Kingdom of Great Britain. Then in 1801, the British got sick of the Irish rebelling against them all the time, so they convinced (or bribed, one of the two) the Irish Parliament to pass their own Act of Union. This merged the Kingdom of Great Britain and the Kingdom of Ireland into the United Kingdom of Great Britain and Ireland. Of course they had to update their flags:

The union didn't last in its complete form forever though. Those Irish lads didn't stop rebelling (if anything, put a little more authority on them and they will rebel until the cows come home), and most of Ireland achieved independence in 1922. I say "most" because the Brits kept control of a little chunk of the island where the majority of the population were Protestant and loyal to the crown, which came to be known as Northern Ireland (I would go into that further, but I'll probably get hate mail from people on both sides of the issue telling me I'm biased and got lots of things wrong, so I'm good). So because a piece of Ireland is still in the UK, the Irish saltire is still incorporated in the Union Jack, but the government had to annoyingly change all their letterheads and business cards and embroidered bathrobes from "The United Kingdom of Great Britain and Ireland" to "The United Kingdom of Great Britain and Northern Ireland."

So why does all this still matter? Well you can't erase nationalism from the hearts and minds of the people, no matter how hard you try (looking at you, Slobodan). Both Scotland and Wales have made attempts to reclaim their culture, language, and crazy sports (fig.9) in the twentieth century, as well as received permission to form their own regional parliaments in charge of local taxes, laws, and odd style of dress (again, fig.9). Two nationalistic parties have also formed, Plaid Cymru in Wales, and the Scottish National Party in Scotland, both of which advocates independence from the UK (which until they go through with it, is almost like a whiny sixteen-year-old melodramatically packing a suitcase and threatening to run away from home). So who knows what shape the United Kingdom will take in the years to come, but one thing is certain: you know they'll change the flags with it! 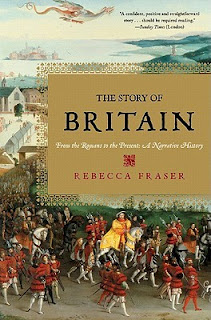 If you're interested in reading more about British history, check out this Canned Historian approved book that was used to conduct more research on this topic:

The Story of Britain: From the Romans to the Present: A Narrative History, by Rebecca Fraser
Published: 2006; Paperback: 848 pages
Canned Rating: 4 out of 5 Victoria Heads