No other war seems to have impacted or defined a civilization more than the Trojan War did to Ancient Greeks (unless you count the Pastry War on the French, who sure do love their pastries). The stories of the clash between the Achaeans and the Trojans were passed down from generation to generation, and contain lessons that are still common knowledge today. Who could ever forget the kidnapping of Helen by Paris, the exploits of Achilles, the cunning of Odysseus, the courage of Hector, and of course the armpit-stabbing-suicide of Ajax? Plus, who doesn't know about the Trojan Horse, and its moral that you shouldn't just accept strange gifts left outside your door (I'm watching you, UPS man!). So the ultimate question: is the Trojan War one of the most important conflicts in history?

For once, the reason for the war wasn't about land or money or resources or ears, but a much worthier cause: the love of a lady. More importantly, it was a hot lady! Helen was considered the most beautiful women in all of Greece, making Kate Upton look like Yoda with third-degree face burns in comparison. She was the Queen of Sparta, married to King Menelaus, who was kicking people into bottomless pits well before Leonidas. However, a man named Paris, a prince of Troy, had admired Helen from afar, and sought to make her his own. Before leaving Sparta on what seemed to be a diplomatic mission, Paris was able to stow Helen away in his carry-on (airport security was much more lax than it is now). It is unclear whether Helen was forcibly taken away or if she went along willingly (we've all been there, fellas). Either way, Menelaus was madder than Kate Upton when she founds out about that burned Yoda quip (she's a big fan of mine...for now).

Menelaus asked his brother Agamemnon, King of Argos and the best general that side of Olympus, to command a coalition of Greek armies that would sail across the Aegean Sea to Troy. Even though Troy was located in modern-day Turkey, they shared the Greek culture, language, and ability to chug watered-down beer. Therefore, soldiers in Agamemnon's army were called "Achaeans" after the Greek region from where most of the troops were recruited (the Texas of the Ancient Greek world). However, a couple of the best soldiers around tried to avoid the war entirely: Odysseus, king of Ithaca, faked insanity to avoid his commitment to the cause, and the famous warrior Achilles dressed as a woman to escape recruitment. Unfortunately for them, both were discovered (Odysseus by appearing sane enough to not accidentally kill his infant son, and Achilles by admiring a merchant's weapons instead of the jewelry and blouses that were on sale), and were dragged along to fight for Helen's return. It is estimated that around 70,000 to 130,000 men comprised the Achaean force, an army which Grant and Lee would have labeled as "cute," but was quite the party by ancient standards.

After several years or organizing and voyaging and attacking other kingdoms that had nothing to do with anything (what is this, the Fourth Crusade?), the Achaeans finally landed on the sands of Troy. Trojan King Priam and his heir, Hector, had been preparing for this invasion ever since Paris came home with Helen in his arms yelling, "Look what I got from the duty-free shop!" Hector led a force to halt the attack but were forced to give up the beach; the Trojans would need to remain within their city walls and postpone their annual volleyball tournament. A stalemate would then subsist for nine freaking years, with the Achaeans unable to mount a successful siege against Troy's walls. Several explanations of this exist, such as the lack of money to keep all of the Achaean soldiers in battle at once, a lack of food and supplies over the course of the campaign, as well as an oracle made before departure stating that the Achaeans wouldn't succeeded until the tenth year of the way anyway (so why bother trying?). A mutiny even took place at the end of the ninth year when the Achaeans wanted return home to harvest their crops, demonstrating how boring the war must have been if they would rather be farming. Achilles convinced the army to remain, only to storm off himself when Agamemnon took away his concubine (sharing is less caring, more weird in that situation).

In the start of the tenth year, the Achaeans and Trojans came up with an idea to solve the conflict: have Menelaus and Paris fight each other in a duel for Helen's hand. Sure, they could have done this from the beginning and spared thousands of lives, but when that rush of testosterone starts it's hard to stop it. This plan didn't really work out anyway: Menelaus took Paris down, but the Trojan prince was dragged away before the final blow and the armies began to clash once again. Achilles was still being a mopey-pants about the whole concubine thing, but he allowed his best friend, Patroclus, to use his armor and fight in his place. Patroclus had some initial success, pushing the Trojans back to their walls, but Hector came on the scene and speared Patroclus right in the belly. Mad with grief for the loss of his friend, his armor, and that concubine (he really wouldn't get over that whole thing), Achilles returned to the battlefield. He found Hector trapped outside the city walls wearing his armor and, knowing wear his armor's weak point was, stabbed him right in the neck. The Achaeans proceeded to dishonor Hector's body by stabbing it multiple times, dragging it behind a moving chariot (fig.3), and giving it to Jeff Dunham to become his new hilarious puppet. Only the personal intersession of King Priam convinced the Achaeans to tone down the whole mutilation thing.

After this point, a lot of silly things happened. Let's just breeze through them, shall we?

Finally the tenth year of war arrived, and Odysseus came up the trickiest plan in the history of warfare. No, not smallpox blankets, you jerk! I'm talking about the Trojan Horse, of course, of course (fig.4)! One night, the majority of the Achaean army sailed out of sight while a giant wooden statue of a horse was left outside the gates of Troy. The Trojans, thinking it was the customary "Thanks for letting us war with you for ten years" gift, dragged the horse into the courtyard. But as we all know, the horse was filled to the brim with the best Achaean soldiers who weren't already dead and/or too smelly. So at night, when the Trojans were fast asleep, the Achaeans popped out and began to kill everyone in sight. While the Trojans fought valiantly, they just couldn't get the sleepies out of their eyes fast enough and paid the price for it. King Priam was killed by Neoptolemus, son of Achilles, and Hector's infant son was thrown from the ramparts, thus ending the royal line of Troy in a very family-friendly way. Menelaus found Helen (hey, remember the part about she being the whole reason for the war?) and was half-tempted to stab her, but was distracted by her beauty and decided just to take her home (women really do have all the power). The city was destroyed, the men slaughtered, the women and children enslaved, and the public library's card catalog was reorganized in a way that Dewey would not have approved.

Of course, the trouble didn't just end when the war was over. That would have been too easy! Many of the Achaeans had difficulty returning to their home city-states across the Aegean. Meneleaus and Helen were caught in a storm and may have been stranded on an island for eight years, at which point Menelaus was already sick of Helen's nagging and wished he could just bring her back to Troy. Agamemnon made it back to Argos, bringing along a Trojan princess as his own concubine (finally, he could stop borrowing other people's), only to be killed in his own halls by his wife's new boyfriend (an episode of 20/20 waiting to happen). Odysseus had the wackiest journey of all, spending the next ten years getting captured by a crazy lady, fighting with a one-eyed beast, escaping from a tribe of cannibals, and killing a group of men who were trying to snag his wife from him. And I get grumpy when my flight gets delayed an hour! The surviving Trojans had a post-war adventure of their own: a warrior named Aeneas led his comrades from the ruins of Troy to Italy, where they settled and eventually became the ancestors of Romulus and Remus, the twins who built Rome in a day. Looking at the far-reaching consequences that the Trojan War had, can it be considered the greatest war in history?

I suppose it could...if it actually happened. That's right, the story of the Trojan War was merely a legend passed down from generation to generation beginning in the Greek Dark Ages (1100-800 Before Crullers). The most famous version was told by man named Homer (no, not the yellow one), who wrote about a small portion of the war in The Iliad, and the fate of some of the Achaeans, notably Odysseus, in The Odyssey. While the Ancient Greeks certainly took the stories regarding the Trojan War as truth, there wasn't any actual evidence that any of it really happened. Much of the tale defies imagination; I didn't even touch upon all the times that the gods, such as Zeus, Poseidon, and Apollo, intervened to decide the fate of many battles (apologies to any Greek pagans still out there). The only shred of proof that any of this may have happened are the remains of an ancient city in present-day Turkey that seem to match Troy's description (fig.5); the city was destroyed around 1190 BC, but it is more likely that something like an earthquake or fire did the deed rather than soldiers coming out of a wooden horse. In the end, the Trojan War is a great story, but that's really all it is: a story meant to entertain and teach a lesson or two. So why would I bother to write a history on an event that has no historical basis? 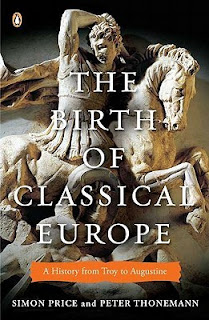 The Birth of Classical Europe: A History from Troy to Augustine, by Simon Price and Peter Thonemann
Published: 2010; Paperback: 416 pages
Canned Rating: 3 out of 5 Imaginary Objects