Wise men once said that, "Istanbul was Constantinople; now it's Istanbul, not Constantinople." And they would be right! The city in Turkey that straddles the border of Europe and Asia is now known as Istanbul, but way back when it was called Constantinople. But that's been a long time gone...over five-and-a-half centuries to be more precise. So even though that's apparently nobody's business but the Turks', let's look into the reason why if you have a date in Constantinople, she'll be waiting in Istanbul.

Constantinople was technically founded in 330 Anno Doughnutty by the Roman Emperor Constantine (who, in all his narcissism, named it after himself), but it was really the site of the Ancient Greek city of Byzantium. That's like me going to Pittsburgh and saying, "I'm going to build an even better city here!" Which wouldn't be hard, cause it's Pittsburgh, but still, not cool. Anyway, Constantinople served as the capital of the eastern half of the Roman Empire, but then it became the only capital when Rome itself was bombarded with barbaric barbarians. Historians like to refer to the empire that Constantinople was centered around as the Byzantine Empire, to distinguish it from the Roman Empire and make it less confusing. But the Byzantines saw themselves as the Roman Empire, and in a sense, they were a continuation of the Roman Empire. So good job making things more confusing, you stupid historians! The nerve of those people (present company excluded, of course)!

The biggest difference between the Byzantines and Western Europe was religion. People in the east thought the Pope was getting a little too high on his horse/Popemobile, proclaiming himself and Rome as the center of church authority. There were also theological differences between East (Orthodox) and West (Catholic), with the Pope not appreciating the Byzantines' stance on issues like transubstantiation, the anthropomorphic embodiment of the Trinity, and unleavened bread, which would seem scandalous if someone could explain that stuff in tiny words (don't look at me). Anyway, the spat became permanent with emissaries on both sides excommunicating the other in 1054 (which was quickly followed by slappy fights), initiating the Great East-West Schism (fig.2). Things got even worse when Constantinople was sacked in 1204 in the Fourth Crusade by Catholics who obviously didn't get the memo that they were supposed to be fighting the Muslims in the Holy Land. The rift was now beyond repair (as was the state of Constantinople after the sack) and the Byzantines were left without many friends in Europe to play cat's cradle with.

Which was a problem, given the enemy on Constantinople's heels. The Ottoman Empire started out like any other small Islamic kingdom in Turkey: broke away from a larger power, attempted to create legitimacy through farfetched stories of crazy dreams and doctored family trees, and just refused to play nice with their neighbors. The difference is that the Ottomans were pretty darn good at taking over other lands, and they became the head-honcho in Turkey by the mid-14th century. They even managed to conquer sections of the Balkans in Europe previously under Byzantine hands, reducing the Empire to a tiny section surrounding Constantinople (fig.3). Every Christian knew that the Ottomans would not rest until the city was theirs, but Catholics just couldn't get over that leavened bread thing, and many kingdoms refused to send aid to the Byzantines. On the other hand, the Orthodox Byzantines liked to say that would rather be ruled by "the Sultan's turban than by the Pope's mitre," to which the Catholics would respond, "I know you are, but what am I?" proving that Europe in the Middle Ages was ruled by ten-year-olds.

Constantinople thought they caught a break in 1451 when an eighteen-year-old named Mehmed ascended to the Ottoman throne, hoping he would be too occupied with physics class and finding a date for the prom to think about finishing off the Byzantines. But they were proven wrong when Sultan Mehmed ordered the construction of a fortress just a few miles north of Constantinople on the Bosphorus (the strait dividing Europe and Asia), partly to prepare to siege the city, but also to peep into the windows of cute Byzantine chicks. Byzantine Emperor Constantine XI begged Western Europe for aid, but the Pope and the Catholic kings merely just stuck their thumbs in their ears and made funny faces at them. The only European powers who came to help were the Italian Republics of Venice and Genoa, but that was really to protect their own ports on the Greek islands, and still made raspberry noises whenever the Byzantines spoke to them.

Finally, on April 6, 1453, the Ottomans began the siege. They had a major advantage since they were in possession of a new, little thing called the cannon. Legend tells us that the cannons were made by a Catholic Hungarian named Orban, who first offered his services to the Byzantines, but the Emperor turned out his pockets and showed that all he had in there were moths and pocket lint. Without a second thought, Orban went right to Mehmed with his cannons, and the Sultan awarded him with all the goulash a Hungarian could ask for. For nearly two months, the citizens of Constantinople endured non-stop cannon fire, Turkish soldiers attempting to scale the walls (or even dig tunnels underneath them), a naval blockade of their food supply, and constant cat calls about the corpulence and promiscuity of their mothers. The Ottomans sent envoys to Constantine XI on May 21, letting him know that if he gave up the city, the Sultan would permit him to move to Greece and be Emperor there. Constantine reportedly tore off his sunglasses, looked at the envoys dramatically, and said in a deep voice, "Giving you the city depends neither on me nor on anyone else among its inhabitants; as we have all decided to die with our own free will and we shall not consider our lives." Which, translated into Harrison Ford speak, is, "GET OFF MY PLANE!"

Unfortunately, if this was "Let's Make a Deal," that choice would have been a Zonk. On May 29, the all-out assault on the city began, and eventually the Ottomans broke through the wall like little Kool-Aid Men. Legend has it that Constantine then threw off his royal purple robe and ran into the streets to join the fray. Some say he died with his soldiers, some say he eventually hung himself, and some say he somehow escaped the city and is hiding out with Elvis, Tupac, and Andy Kaufman to this day. Constantinople now belonged to the Ottomans, and they were allowed the customary three days of All-You-Can-Pillage-And-Plunder, which is how I think birthdays should be celebrated, but nooooo. By all accounts, the Ottomans treated the Byzantines better in the aftermath of the siege of 1453 than the Crusaders did in 1204 (this might be because Muslims and Orthodox Christians are on the same side of the very testy leavened bread issue), and Sultan Mehmed even made churches, monasteries, and factories where they produce those Christian fish bumper stickers off-limits to the marauding soldiers.

At the age of twenty-one, Mehmed was the unquestionable ruler of the Near East, and the conqueror of the last vestiges of the 1,500-year-old Roman Empire. This is why he was then known as Mehmed the Conqueror (fig.5), which really isn't the most creative name in the world. Why not, Mehmed the Vanquisher, or Mehmed the Top Dog, or even Mehmed the Exemplar?! I would take over a heavily-fortified ancient city any day in order to be called the Exemplar! Anyway, Mehmed moved the Ottoman capital from Adrianople (pronounced ADRIAN!!!ople, with a slur) to Constantinople, where it would remain until the fall of the empire in 1922. And, lemme guess, he changed the name to Istanbul, right? Actually, the city's name was really just Turkified to "Kostantiniyye," and was continued to be called that in official Ottoman documents and homework assignments. So where does Istanbul not Constantinople come in? It is derived from the Greek phrase "in the city" ("eis tin polin"), which was Turkified into the nickname Istanbul. It actually wasn't until 1930 that the Turkish government said, "Yeah, can you guys lay off the Constantinople stuff and just call it Istanbul?" The Turkish postal system even refused to mail items addressed to Constantinople, which put my side-business of exporting my own special cured meats of feral cats to Turkey in temporary jeopardy.

Many will say that the Fall of Constantinople was an all-around bad thing for Europe and Christianity. The Muslim Ottomans now had a clear shot to the rest of Europe, and indeed they did attack major cities like Vienna several times. But I will argue that, in the long run, Europe emerged more successful with the Ottomans on their tails. Greek intellectuals who escaped the siege and subsequent takeover of their homeland found nice comfy homes in Western Europe, and their teachings and culture may have initiated the Renaissance, the Scientific Revolution, and the Greek life at your local university. Also, with the hostile Ottomans in the way, Europeans had to find a new way to get to India and obtain those beloved spices they now couldn't live without. This is why explorers (like some guy named Cristoforo Colombo) went exploring across the Atlantic, and just so happened to find another chunk of land to exploit develop and inhabitants to violently convert teach the ways of the Lord. So all around, Europe turned out alright without those leavened-bread-eating Byzantines, and every day Europeans should thank God (or maybe Allah) that Constantinople did indeed "get the works." 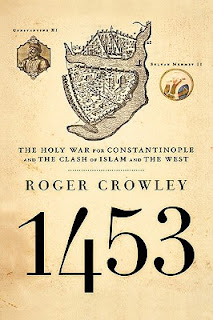 If you're interested in reading more about the fall of Constantinople, check out this Canned Historian approved book that was used to conduct more research on this topic:

1453: The Holy War for Constantinople and the Clash of Islam and the West, by Roger Crowley
Published: 2005; Paperback: 320 pages
Canned Rating: 3.5 out of 5 Orthodox Crosses