For all intents and purposes, the Sixth Crusade did its job and brought the holy city of Jerusalem back into Christian control. Nevermind the fact that the Crusaders were not allowed to build a wall to defend their kingdom, or that Muslims were still allowed to rule certain areas in and around the city, or that the guy who won the city was excommunicated by the Pope and was no better than the Antichrist (who really isn't that bad of a guy once you get to know him). As such, many people in Europe saw the Sixth Crusade as not really a crusade at all, but some sneaky deal made in a smoke-filled room (fig.1). Of course, once rumors of a Seventh Crusade started swirling about, people were just so scarred from the last few that many Europeans wanted nothing to do with it. (On a related note, I hope Star Wars: Episode 7 will be at least halfway decent! It has to be better than the prequels, right? Right?!)

As predicted by many when Holy Roman Emperor Frederick II made his deal with Ayyubid Sultan al-Kamil to take possession of Jerusalem, Christian control of the city didn't last too long. After the ten-year truce expired, the Ayyubids allowed their Muslim buddies, the Khwarzmians (who were in the area after getting their butts kicked by the Mongols in Central Asia), to march right into the undefended city in 1244 and kick the Crusaders out faster than Jack the Ripper at a Ladies' Night. While the fall of Jerusalem usually made headline news in Europe, they were so used to it at this point that it barely beat out the local production of Footloose for the back page. To add to the apathy, many kingdoms were too busy with their own problems (aristocratic rebellions in England, the continuing Emperor/Pope clash in Germany, a sudden deficit of horned helmets in Norway) to really care about the distant Holy Land. Only one king was willing to continue the crusading spirit (what a jerk), and thus he is the only major player here: 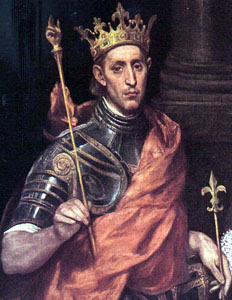 King Louis IX of France was seen as the perfect ruler. He was firm with his enemies, compassionate with his subjects, pious with the Church and clergy, and always remembered his wife's birthday. His reign was notably successful in that he ended a religious rebellion in Southern France in what came to be known as the Albigensian Crusade; the fact that he was possibly the only living king that oversaw a successful crusade made him the obvious choice to lead another one.

Since other Europeans were otherwise indisposed, the next crusade to impose on the Holy Land would be an all-French affair (so get your fondue pots ready!). In 1245, he received permission from the Pope to divert the tax that normally went to the Church (called a tithe) into a fund to support the next crusade. He appointed his three brothers, Alfonso, Charles, and Robert, to be his officers, hoping that keeping it within the family would help avoid the civil strife that plagued the last few campaigns to retrieve Jerusalem (obviously, Louis hadn't fully studied the brotherly relationship between Richard and John during the Third Crusade). Within three years, he amassed an army of 15,000 troops, which was a formidable force even if they were French. Finally in August 1248, Louis and his army set sail for Cyprus to meet with the rulers of the Crusader States. So far, the king had ensured peace and cooperation, and avoided the mistakes made by everyone before him. Don't worry, someone's going to screw it up eventually.

The 25,000 ducat question was where to begin the crusade. While taking Jerusalem seemed to be the overall point of these stupid things, attacking the city right away had been long seen as foolhardy, since the Ayyubids and their Muslim allies controlled everything around it. Louis believed that the Fifth Crusade had the right idea (albeit terrible, terrible execution) in that it sought to conquer Egypt, the Ayyubid center of power, before daring to even salivate about the Holy Land. And so in May 1249, the French used their powers of déjà vu and began another Crusader siege of the Egyptian port city of Damietta, much like the Fifth Crusade did 31 years prior. This time it wasn't so difficult; the defenders remembered the violence, starvation, disease, and high beef prices of the previous siege, and most inhabitants fled south just after the first arrow was launched.

Now that the Crusaders were back in Damietta, the next question was what to do with it. Last time this happened, the Ayyubid Sultan al-Kamil proposed to trade the Egyptian port for Jerusalem, which was rejected by a control-freak cardinal. Half of Louis's camp was hoping a similar deal would flutter their way, even though al-Kamil sighed his last in 1238, and his son, Sultan as-Salih, was even more of a killjoy. The other half wanted to hold Damietta and continue onto the capital of Cairo, just like the Fifth Crusaders. Louis saw this as the more honorable route; he saw the easy victory in Damietta as proof that God was finally on their side (He's quite the bandwagon fan), and didn't want any sneaky, Sixth-Crusade-like deals to get what they Crusaders rightfully deserved. To make things sweeter for the Crusaders, as-Salih died in November 1249, and the Muslim forces were in more disarray than the Crusaders typically were. And so it was decided to march south and attack the Ayyubid camp outside of Mansurah. Lest it got too déjà vuey, the Seventh Crusaders learned from the mistakes of the Fifth, and waited until after flooding season ended before camping on the banks of the Nile. (That's why it's always smart to ask the concierge before making plans in an unknown place.)

The attack on Mansurah was slow-going as first, until in February 1250 when a nice Egyptian man (who wasn't too nice until the Crusaders paid him off) showed Louis an easy way to cross the Nile and attack the city from two fronts. Louis divided his army and gave half his troops to his brother Robert, who would sneak across the river and siege the walls simultaneously. If that sounded like too good of a plan for the Crusaders to pull off, you're already an expert on these things! Instead of waiting for Louis's signal, Robert saw the gates of the city wide open, and decided to attack early so he could hog all the glory. Unfortunately for him, this was precisely the plan of a man called Baibars who led Egypt's Mamluks, the Sultan's Turkic slaves who were temporarily running the kingdom while he was too busy being dead. The Mamluks outnumbered the Crusaders in the subsequent street fighting, and Robert received an especially fatal hadouken. Of course, when Louis attempted to begin the simultaneous attack, his brother's forces were nowhere to be found, and was forced to fight off a large attack with his divided army. Though victorious, the Crusaders lost the majority of their men and had yet to take the Ayyubid capital. Louis was beginning to feel God's fickleness again as He changed jerseys during the commercial break.

The Crusader forces tried to retreat back to Damietta, but found the new Ayyubid Sultan's army blocking the way like a cow on the only road in Nebraska. Louis's never-say-die attitude convinced him to try to push through, but after substantial losses he was forced to adopt a say-die-every-once-in-a-while mindset. He surrendered himself to Ayyubid forces and was held for ransom. As luck would have it, the Ayyubids in Egypt would soon be overthrown by the Mamluks, meaning the Crusaders might have been able to escape if they held out just a little bit longer (the Big Man upstairs tuck and rolled off the Crusader bandwagon in a hurry, didn't He?). The Mamluks took over as Louis's captive, and asked the French government for 400,000 dinars for his release. This caused a mild uprising in France called the Shepherds' Crusade, where the peasantry gathered together and made plans to rescue their beloved Louis, only to get distracted like crusades do and started to attack all the Jews in Paris (not even close to the right idea). The ransom was finally paid in May 1250, and king was free to return to France.

Only he still held out hope that he could continue the crusade. He traveled to Acre where, unlike Emperor Frederick two decades prior, did not have spoiled meat thrown at him (though you can argue it's not truly a trip to Acre without that). He fished around for alliances that would help him defeat his Muslim enemies, even asking the Mongols to come over and lob off some heads for them (like they needed the invitation). Finally in April 1254 after his mommy called, Louis decided to give up for the time being, and sailed back to France. He would not easily forget the Holy Land, however, and promised to return at the head of another crusade. That's right, folks: join me and Louis IX next year as we kick off yet another Crusaders Month!

*desperately searches for a rope and a sturdy beam*
Composed by Sima Dave circa Monday, June 29, 2015